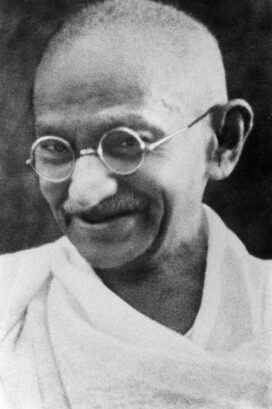 Revered in India as the “Father of the Nation,” Mohandas K. Gandhi is also a worldwide icon of non-violent political resistance.

Mohandas Gandhi was born in India and studied law in England, then spent 20 years defending the rights of immigrants in South Africa. He returned to India in 1914, where he eventually became leader of the Indian National Congress.

At the time, India was part of the British Empire, and Gandhi urged non-violence and civil disobedience as a means to independence. His public acts of defiance landed him in jail many times as the struggle continued through World War II.

Gandhi participated in the postwar negotiations with Britain that led to India becoming a fully independent country on August 15, 1947. He was shot to death on January 30, 1949 by Nathuram Vinayak Godse, a Hindu extremist who felt that Gandhi was an obstacle to Hindu political power.

An advocate of simple living, Gandhi ate a vegetarian diet and made his own clothes; his personal spinning wheel became a symbol of his uncluttered lifestyle. After his death, Gandhi’s teachings of change through non-violence influenced other social activists, including Rev. Martin Luther King, Jr.

Gandhi’s autobiography, The Story of My Experiments With Truth, was published in 1927. His birthday, October 2nd, is a national holiday in India.

Mohandas Gandhi is often called Mahatma Gandhi— Mahatma being the Hindu term for “great soul”… The ‘K’ in his birth name of ‘Mohandas K. Gandhi’ stood for Karamchand… Mohandas Gandhi wed Kasturba Makhanji in 1883, in an arranged marriage; he was 13 at the time. They had five children and remained married for nearly 61 years, until her death in 1944… Among Gandhi’s many famous quotes is the saying, “An eye for an eye will make the whole world blind”… Mahatma Gandhi was played by Ben Kingsley in the 1982 film Gandhi. The film won eight Academy Awards, including best film and best actor for Kingsley.

Something in Common with Mohandas Gandhi