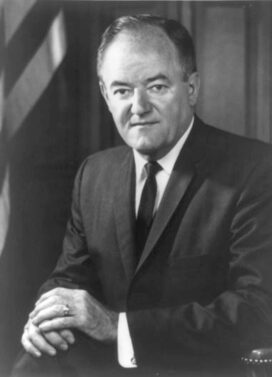 Hubert Horatio Humphrey, Jr. was the vice president of the United States under President Lyndon Johnson from 1965-69. He was then the Democratic candidate for president in 1968, when he was narrowly defeated by Republican Richard Nixon. Hubert Humphrey had a long career in politics, first as mayor of Minneapolis, Minnesota (1943-48) then as a U.S. Senator from Minnesota (1948-1964) before being picked for the vice presidency. Humphrey was a champion of civil rights and social reform, and played a major role in adding a civil rights plank to the Democratic platform in the volatile Democratic Convention of 1948. Humphrey was nicknamed “The Happy Warrior” for his sunny demeanor and his passionate support of liberal causes. After his defeat in 1968, Hubert Humphrey served again in the U.S. Senate from 1971 until his death in 1978. He died of cancer while still in office, and his wife, Muriel Buck Humphrey, was appointed by Minnesota’s governor to finish his term.

Something in Common with Hubert H. Humphrey