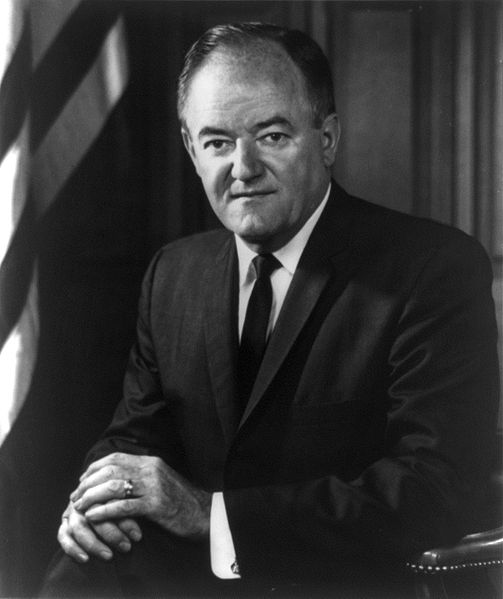 Humphrey is a famous Minnesotan, so it’s a surprise to learn that he was born in South Dakota. He was the mayor of Minneapolis during World War II, then represented the state as a U.S. senator from 1948 until 1964, when he became vice president under Lyndon Johnson.

Hubert Humphrey was nicknamed “The Happy Warrior” for his sunny attitude and upbeat support for liberal causes. Not that he lacked steel: he was a rock-solid champion of civil rights.

Perhaps his most famous moment was the 1948 Democratic Convention, when he helped pass a civil rights plank that led outraged Southern conservatives (led by reliably wrong-headed Strom Thurmond) to walk out of the hall.  Humphrey’s money quote:

“The time is now arrived in America for the Democratic Party to get out
of the shadow of states’ rights and walk forthrightly into the bright
sunshine of human rights.”

Preach it, brother. Humphrey and his allies won the day, narrowly, and President Harry Truman stood on that plank while winning his surprise re-election that November.  (That was the famous “Dewey Defeats Truman” election.)

Hubert Humphrey never quite reached the White House, though he came plenty close. He was a Democratic favorite in 1960, but got run over in the primaries by the John F. Kennedy juggernaut.  He was LBJ’s running mate in the landslide win of 1964, and served as vice president for four years.  In 1968 he was finally the Democratic candidate, but the South had its revenge, deserting him in droves for Republican Richard Nixon and Independent George Wallace.  Nixon squeaked through, winning with nearly 56% of the electoral vote but less than a 1% edge in the popular vote.  (And we know how that presidency turned out.)

In a rare step for a former vice president, Hubert Humphrey ran again for the U.S. Senate in 1970 and was elected. He served until his death from bladder cancer in 1978.

Typical Humphrey: knowing death was coming, he called Richard Nixon (who was in his post-Watergate doldrums) and invited him to his upcoming funeral. Nixon accepted and attended, along with President Jimmy Carter and former President Gerald Ford.  Pretty good turnout for a small-town boy from Wallace, South Dakota.

See our biography of Hubert Humphrey >>