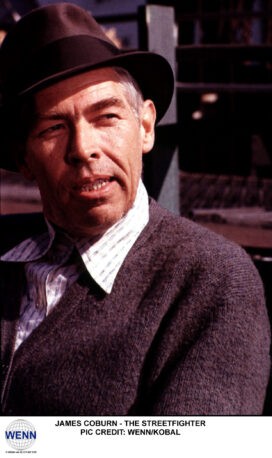 Tall, lean and sporting one of the biggest grins in Hollywood, James Coburn was best known for his roles in The Magnificent Seven (1960, with Steve McQueen), Our Man Flint (1966) and In Like Flint (1967). He made his film debut in 1958, and early in his career he was frequently cast as a gunslinger or sidekick in both dramas and comedies. The two Flint movies showed his charm and flair for comedy, as did the political satire The President’s Analyst (1967), which he also produced. Coburn collaborated several times with director Sam Peckinpah during the 1970s, in front of the camera for Pat Garrett and Billy the Kid (1973) and Cross of Iron (1977), and behind the camera for 1978’s Convoy (second unit director) and 1979’s Circle of Iron (story). Due to crippling arthritis, Coburn was less active in the ’80s and ’90s, although he continued to work steadily in movies and television. A longtime Hollywood star, he finally won an Oscar for his portrayal of a mean drunk in Paul Schrader‘s Affliction (1998, starring Nick Nolte and Willem Dafoe). His other films include Charade (1963, with Cary Grant), The Great Escape (1963), Payback (1999, with Mel Gibson) and Monsters, Inc. (2001, as the voice of Henry J. Waternoose III).

Something in Common with James Coburn