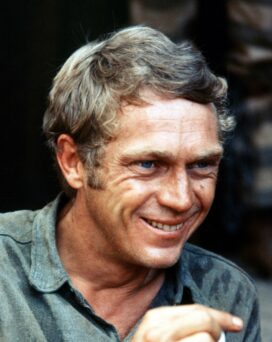 Steve McQueen’s steely image — blue-eyed cool on the outside, rebellious turmoil on the inside — made him a box-office smash in the 1960s and early ’70s. He was in the early TV western Wanted: Dead or Alive (1958-61) and the cult horror film The Blob (1958). But it was his work in The Magnificent Seven (1960, with Charles Bronson) and the World War II epic The Great Escape (1963, with James Garner) that established himself as a lean, laconic action star. He received an Oscar nomination in 1966 for The Sand Pebbles, but he remains best known for the 1968 cops-and-car-chases flick Bullitt. That film, with McQueen racing up and down the hills of San Francisco in a green Ford Mustang, is regarded as the granddaddy of car chase pictures. McQueen died at a clinic in Mexico in 1980, after undergoing surgery for cancer.

McQueen was married three times: to actress Neile Adams (1956-72), to actress Ali McGraw (1973-78), and to model Barbara Minty (whom he married in 1980, the year of his death)… McGraw was his co-star in 1972’s The Getaway; she was married to the film’s producer, Robert Evans… The Getaway was remade in 1994 with then-married couple Alec Baldwin and Kim Basinger in the roles first played by McQueen and McGraw… McQueen took an unorthodox approach to fighting the cancer that eventually killed him. According to an obituary by the Associated Press, McQueen “died of a heart attack… at a clinic in Juarez, Mexico, one day after surgeons removed a five-pound tumor from his abdomen.” The same report said McQueen “had fought a strong battle since August to overcome the cancer through a therapy program that included the controversial drug laetrile, coffee enemas, large doses of vitamins and intramuscular injections of animal cells.”

Something in Common with Steve McQueen