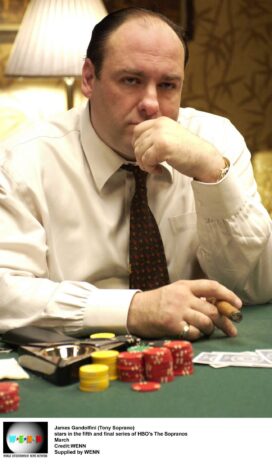 James Gandolfini will always be remembered as Tony Soprano, the brutal yet strangely sensitive mob boss at the heart of the mobster soap opera The Sopranos. James Gandolfini grew up in New Jersey and graduated from Rutgers University there with a degree in communications in 1983. He spent most of the 1990s on stage and in small parts in movies such as True Romance (1993), Get Shorty (1995) and A Civil Action (1998). Beefy, balding and imposing, he was still mostly unknown when he was cast as Tony Soprano, the brooding New Jersey kingpin who sees a psychiatrist while juggling the frustrations of crime and family in the HBO series The Sopranos. The show was an unexpected hit and made Gandolfini a star as it ran for six seasons, from 1999-2007 (with a year off in 2003). Gandolfini also kept working in feature films, including The Mexican (2001, with Julia Roberts), The Man Who Wasn’t There (2001, starring Billy Bob Thornton), Romance & Cigarettes (2005, with Kate Winslet) and Zero Dark Thirty (2012). Gandolfini died suddenly in 2013 while in Italy for a film festival, when he was 51 years old. The local coroner’s report confirmed that Gandolfini died of a heart attack.

James Gandolfini was married to the former Marcy Wudarski from 1999 until their divorce in 2002. They had a son, Michael, in 2000. Gandolfini then married model Deborah Lin in 2008 and they remained married until his death. Their daughter, Liliana, was born in 2012… According to a 2013 report in USA Today, “During Gandolfini’s time as a student at Rutgers in New Brunswick he was a close friend of Mario Batali, who would become a celebrity chef.”

Something in Common with James Gandolfini