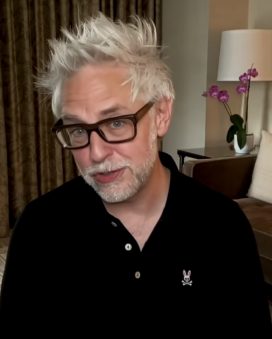 Gunn got his start in 1995 with Troma Entertainment (the makers of 1985’s The Toxic Avenger), after studying film and getting a graduate degree from Columbia University.

He hit Hollywood in 2002 with the screenplay to the live action film Scooby-Doo (starring Sarah Michelle Gellar). Two years later Gunn wrote the screenplays for Scooby-Doo 2 and for the reboot of Dawn of the Dead.

Gunn made his directorial debut with the horror/parody film Slither (2006).

He then worked in TV and video games for a while, turning to the big screen with superheroes in the 2010 film Super (starring Rainn Wilson and Elliot Page).

2014’s Guardians of the Galaxy was a box office hit, and so was its sequel.

While working on the third movie of the franchise, Gunn was abruptly fired in 2018 by Marvel because of some old off-color jokes he had made online.

Public pushback and the support of his colleagues got Gunn his job back at Marvel a few months later.

In the meantime, Gunn had taken on The Suicide Squad (starring Margot Robbie) with DC Entertainment and Warner Bros.

James Gunn was married to actress Jenna Fischer (The Office) from 2000 to 2008… In 2000, Gunn published the novel The Toy Collector.

Something in Common with James Gunn