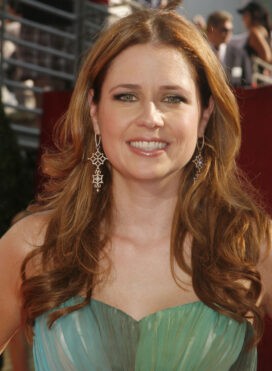 Her pages include photos from behind the scenes

Jenna tells about getting a career started in Hollywood

Actress Jenna Fischer plays receptionist Pam Beesly in the American version of TV’s The Office. A veteran who began her TV career in 1998, Fischer was cast as Pam for the 2005 premiere of the show, and her relationship with co-worker Jim (John Krasinski) became a focus for the second and third seasons. Fischer grew up in St. Louis, Missouri and studied acting and theater at Truman State University, graduating in 1995. She then moved to Los Angeles to be an actress, working part-time jobs and getting guest shots on series like Spin City (1996-2002), Undeclared (2001) and Six Feet Under (2001-2005). The success of The Office made Fischer an “overnight” TV star, and between seasons she filmed movies including the horror flick Slither (2006, written and directed by her husband, James Gunn), the silly Will Ferrell comedy Blades of Glory (2007, also starring Jon Heder) and the adult-olescent comedy Hall Pass (2011, with Owen Wilson).

Jenna Fischer was Emmy-nominated as outstanding supporting actress in a comedy series in 2007 for The Office… She fell down a flight of stairs in May of 2007 and fractured her lower back… Her birthplace is sometimes given as St. Louis, Missouri.

Something in Common with Jenna Fischer