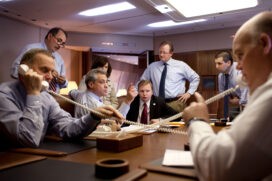 2008 Time article, with the political angles

His full military history, from his days as a NATO honcho

Profile from the Council on Foreign Relations; good links at the end

James L. Jones is the Vietnam veteran and former Marine general who served as National Security Advisor to President Barack Obama from 2009-10. Jones’s father was a Marine officer, and Jones grew up in France and learned to speak fluent French while his father was stationed there. He earned a bachelor’s degree from Georgetown University in 1966, then entered the Marine Corps as a second lieutenant in 1967. He spent a year fighting in Vietnam (1967-68) and then the next four decades rising through Marine posts around the US, Europe and Middle East. Jones served as Marine Corps commandant from 1999-2003 — in which post he was a member of the Joint Chiefs of Staff — and then was NATO’s supreme allied commander in Europe (or SACEUR) from 2003-06. He retired from the Marine Corps in February of 2007. No slouch in the networking department, he joined the boards of directors of Boeing and Chevron in 2008. That December, president-elect Obama nominated him to be the next National Security Advisor, and he took office with Obama on 20 January 2009. Jones stepped down from the post in on 8 October 2010 and was succeeded by longtime Obama aide Tom Donilon.

Something in Common with James L. Jones