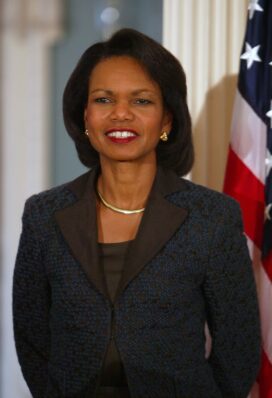 Condoleezza Rice was U.S. Secretary of State from 2005 until 2009 under President George W. Bush, after serving four years as National Security Advisor (2001-05).

Condoleezza Rice was a gifted student and a child prodigy on the piano; she entered college at the age of 15 with the intention of becoming a concert pianist. Along the way she was influenced by political scientist Josef Korbel, the father of former U.S. Secretary of State Madeleine Albright.

Rice changed her plans and studied international politics, and by the early 1980s she was teaching at Stanford University and becoming a prominent public voice on international affairs. She also worked with the Pentagon and with the administration of George Bush the elder as an expert on foreign affairs.

She returned to Stanford during the Bill Clinton administration before being tapped as National Security Advisor by the younger President Bush. In January of 2005, after Bush was elected to a second term, Condoleezza Rice replaced Colin Powell as Secretary of State and served until the end of Bush’s term. She then joined the lecture circuit and took a position at Stanford University.

Condoleezza Rice remains a talented musician; in 2002 she performed a concert in Washington, D.C. with cellist Yo Yo Ma… Condoleezza Rice had an oil tanker named for her while she was a member of the Chevron Corporation board of directors during the 1990s. In 2001 the company changed the name of the ship to the Altair Voyager… Condoleezza Rice is the first African-American woman to hold the post of Secretary of State. The first woman to hold the post was Colin Powell’s predecessor, Madeleine Albright… She became one of the first two women members of the Augusta National Golf Club in August of 2012; the other was South Carolina businesswoman Darla Moore. Augusta National is the site of the annual Masters golf tournament.

Something in Common with Condoleezza Rice