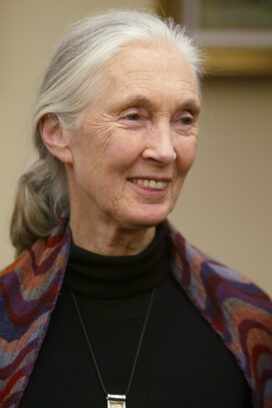 Jane Goodall is the most famous chimpanzee expert in the world. A colleague of anthropologist Louis Leakey in Kenya in the late 1950s, she began studying the social organization of chimpanzees in 1960, in what is now Tanzania. She obtained her PhD from Cambridge in 1965, and in 1967 she established Tanzania’s Gombe Stream Research Centre. Her research, based on extensive field work, is considered a milestone in the study of chimpanzees. Goodall has been a visiting professor at Stanford University (1971-75), Tufts University (1987-88), the University of Southern California (1990) and Cornell University (1996-2002), and has held a position at Tanzania’s University of Dar es Salaam since 1973. She is the author of several books, including In the Shadow of Man and My Life With The Chimpanzees, and in 1995 she was presented the CBE by Queen Elizabeth II. She founded the Jane Goodall Institute in 1977, and she lectures around the world, making appearances to support animal welfare and conservation.

Goodall was once married to Baron Hugo van Lawick, making her the Baroness van Lawick-Goodall.

Something in Common with Jane Goodall