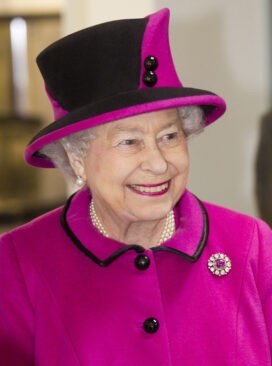 Queen Elizabeth II was the United Kingdom’s reigning monarch for a record 70 years, from 1952 until her death in 2022. Her son, Charles, succeeded her as king.

Elizabeth was proclaimed queen on February 6, 1952 following the death of her father, George VI; she was formally crowned the next year, on June 2, 1953. Her husband, Prince Philip, came from the royal family of Greece and was created Duke of Edinburgh prior to their wedding on November 20, 1947. He died in April of 2021, 17 months before the death of the queen.

Elizabeth and Philip had four children: Charles (b. 1948), Anne (b. 1950), Andrew (b. 1960) and Edward (b. 1964); as the eldest, Prince Charles was heir to the throne. Queen Elizabeth II was the sister of Princess Margaret, daughter of the late Queen Mother, mother-in-law to the late Princess Diana, and grandmother to the princes William and Harry.

She became the longest-serving monarch in British history on on September 9th, 2015, when she reached 63 years, seven months and two days as queen — surpassing her great-great grandmother Queen Victoria.

“Old age” was the official cause of death given on Queen Elizabeth II’s death certificate. The certificate said she died at 3:10 pm on September 8, 2022… Queen Elizabeth II was played by Helen Mirren in the 2006 film The Queen; Prince Philip was played by James Cromwell… The U.K. had 15 different prime ministers during Elizabeth’s time as queen, from Winston Churchill through Liz Truss. (You might count it as 16 if you count each of the two terms of Harold Wilson.) The queen had just greeted her final prime minister, Liz Truss, on September 6, 2022 — two days before her own death.

Something in Common with Queen Elizabeth II