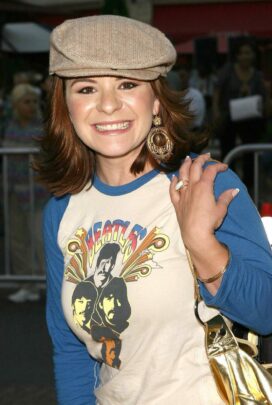 Jenna von Oÿ is best known as Six LeMeure, the chatty and spunky sidekick on the family-friendly 1990s TV series Blossom. Her on-screen career began in commercials (she was featured in a Bill Cosby Jell-O commercial when she was a kid), and she had a small role in Oliver Stone‘s Born on the Fourth of July (1989, starring Tom Cruise).

Most of Jenna von Oÿ’s work has been on television, including appearances in the sitcom The Parkers, voice work for the animated series Pepper Ann and guest appearances on TV shows like 7th Heaven and Chicago Hope. She also took a break from acting to attend film school at the University of Southern California from 1995-97.

Jenna von Oÿ was married to computer consultant Brad Bratcher from 2010 until their divorce in 2020. They have two daughters: Gray Bratcher (b. 2012) and Marlowe Bratcher (b. 2014).

The title role in Blossom was played by actress Mayim Bialik… Many episodes of Blossom were directed by Bill Bixby… On her official site, Jenna von Oÿ says her birth name was Jennifer but that she began calling herself Jenna at age two, and has since legally changed her name to Jenna… On the same site, she reports that she is exactly five feet tall.

Something in Common with Jenna von Oÿ