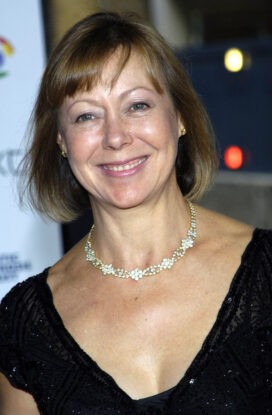 Jenny Agutter is 69 years old
Born: December 20, 1952
Birthplace: Taunton, England
Best known as: The star of The Railway Children (both in 1970 and 2000)
Buy from Amazon.com: Jenny Agutter DVDs and streaming video

In Britain, Jenny Agutter is a respected stage actress; in America, she is remembered in a more commercial vein as the star of the fantasy films Logan’s Run (1976) and An American Werewolf in London (1981).

Jenny Agutter was still a teen when she appeared in the films The Railway Children (1970, as Roberta) and Walkabout (1971, directed by Nicholas Roeg). Her theater career grew apace; in 1974 she played Miranda in Shakespeare‘s The Tempest at the National Theater, opposite Sir John Gielgud as Prospero. In the mid-1970s she jumped to Hollywood, appearing as Michael York’s love interest in the futuristic sci-fi movie Logan’s Run (a film made famous by the brief appearance of Farrah Fawcett).

Agutter also appeared in The Man in the Iron Mask (1976, TV, with Richard Chamberlain) and Equus (1977, with Richard Burton); finally she played the nurse in the black comedy An American Werewolf in London.

She returned to the theater in the 1980s and 1990s, appearing with the Royal Shakespearian Company and elsewhere. In 2000 she starred in a new version of The Railway Children, this time in the grown-up role of Mother. She also appeared in the 2007 West End production of Equus in which Harry Potter star Daniel Radcliffe made his major stage debut. In the 2010s, she appeared as World Security Council Member Hawley in the superhero movies The Avengers (2012) and Captain America: Winter Soldier (2014).

Something in Common with Jenny Agutter