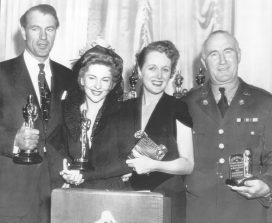 Actress Joan Fontaine was famous both for her Oscar-winning career and for her lifelong feud with her older sister, Olivia de Havilland.

Fontaine’s childhood was unsteady: her parents divorced when she was young, and young Joan was shuttled between her parents on two continents. The rivalry between Joan and her sister Olivia started early: “My sister was born a lion, and I a tiger, and in the laws of the jungle, they were never friends,” she told writer Angela Fox Dunn in 1992.

Nonetheless, Joan followed her sister into the acting business in Hollywood, taking the last name of her mother’s second husband. Dark blonde and elegantly handsome, she worked her way through a few years in B movies before hitting it big as the vulnerable young wife in the sunspense drama Rebecca, directed by Alfred Hitchcock.

She was Oscar-nominated for the role, and Hitchcock the paired her with Cary Grant for his next film, Suspicion, again with Fontaine as a vulnerable young wife. This time she won the Academy Award as best actress, in the same year when her sister was nominated for the film Hold Back the Dawn. It was the high point of Fontaine’s career.

Her last feature was the 1966 horror film The Witches (aka The Devil’s Own), though she appeared on TV now and then (including the obligatory appearance on The Love Boat) into the 1980s. Her feud with her sister never ended, waxing and waning until Fontaine’s death in 2013. Her other films included Gunga Din (1939), Jane Eyre (1944, with Orson Welles), Ivanhoe (1952, as Rowena) and Island in the Sun (1957, with Harry Belafonte). Her 1978 memoir was titled No Bed of Roses.

Though born in Tokyo to a British citizen, Joan Fontaine became a U.S. citizen in 1943… Her father was a cousin of airplane designer and builder Sir Geoffrey de Havilland… She was married four times: to actor Brian Aherne (1939-1945), to film producer William Dozier (1946-1951), to writer and producer Collier Young (1952-1961), and to magazine editor Alfred Wright Jr. (1964 to 1969). All four marriages ended in divorce. She had a daughter, Deborah Dozier, with William Dozier.

Something in Common with Joan Fontaine