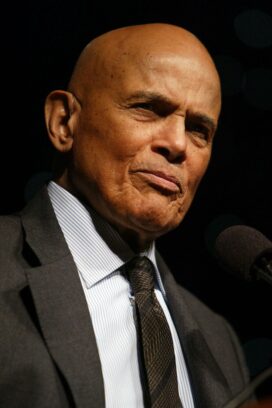 Harry Belafonte is an African-American entertainer and producer who brought Jamaica’s calypso beat to mainstream audiences and then used his fame to fight against racial and social inequality.

He grew up in both Jamaica and the Harlem neighborhood of New York City. After serving in World War II, Belafonte set out to have a career in the theater in New York.

His silky voice soon earned him a recording contract, and in the late 1940s and early 1950s he was a popular New York club performer and sometime television star.

In 1953 he made his movie debut and turned in a Tony Award-winning performance in John Murray Anderson’s Almanac. His version of “The Banana Boat Song” was a hit and started a brief calypso beat craze — it was also the first million-selling album.

One of the first African-American producers in television, Belafonte won an Emmy for 1959’s Tonight with Belafonte and was a frequent guest on television variety shows throughout the 1960s and ’70s.

In addition to a long, successful singing and producing career, Belafonte is well-known as an advocate for human rights and has received awards from the Peace Corps and UNICEF. His film career includes Carmen Jones (1954), Island in the Sun (1957), Buck and the Preacher (1972, with Sidney Poitier) and Kansas City (1996).

“The Banana Boat Song” was co-written by actor Alan Arkin… Belafonte studied drama in New York in the same class of young actors as Marlon Brando, Rod Steiger and Walter Matthau… His daughter, Shari Belafonte, is a model and actress (she starred in the 1980s TV series Hotel)… Belafonte produced the song, “We Are the World,” a hit that aided charity in 1985… In 1968 Belafonte and singer Petula Clark were at the center of a controversy because during the taping of her television special she briefly touched his arm during a duet. TV sponsors thought viewers — especially in the American southeast — would respond negatively to a white woman touching a black man. Clark and Belafonte stood their ground and the special was aired as originally recorded; the controversy only guaranteed a wider audience.

Something in Common with Harry Belafonte