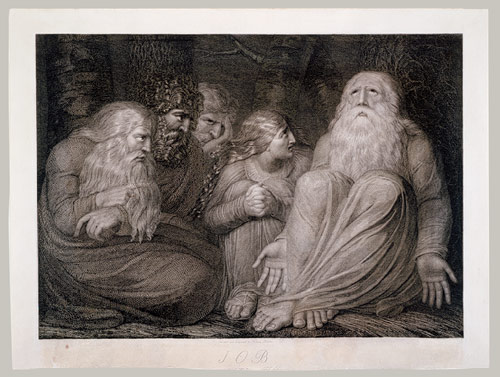 Job is the Biblical figure who suffered great calamities sent by God as a test of his faithfulness.

In the Old Testament of the Bible, The Book of Job is the first of five books commonly called “The Books of Poetry” (the others are Psalms, Proverbs, Ecclesiastes and The Song of Solomon). Date estimates for The Book of Job’s origins range from 1500 B.C. to 600 B.C.

The author is unknown, but it is assumed that the story of Job takes place sometime between Noah and Moses; it is considered one of the earliest books of the Old Testament. In the story, Satan challenges God, saying that the loyal and righteous Job would abandon his faith if he were the victim of a series of terrible trials.

God takes the bet and Job is subjected to a slew of raw deals: his sons and daughters die, his wealth disappears and he is left destitute, and he spends months with open sores across his body, ending up sprawled on an ash heap in sorrow. Job gets angry, but ultimately realizes the power and glory of God, and his faith carries him through: “Then Job sat on the ash-heap to show his sorrow. And while he was scraping his sores with a broken piece of pottery, his wife asked, ‘Why do you still trust God? Why don’t you curse him and die?’ Job replied, ‘Don’t talk like a fool! If we accept blessings from God, we must accept trouble as well.’ In all that happened, Job never once said anything against God.”

The theme of the story addresses the question of why bad things happen to good people, and this is the source of the phrase “the patience of Job.”

Job’s name is typically pronounced jobe, with a long ‘o’, rather than job as in a place of employment.