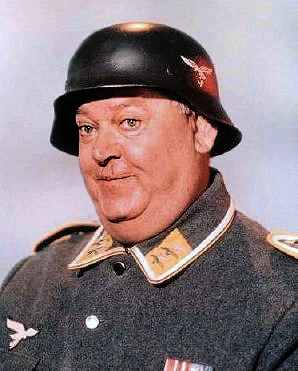 John Banner, a Jew, fled his native Austria in 1938 after the Nazi Anschluss. Years later he got his revenge by playing the buffoonish German sergeant Hans Schultz in the popular American TV series Hogan’s Heroes. Sgt. Schultz’s nervous catch-phrase, “I know nothing! Nooooothing!” is still in pop culture circulation.

John Banner died while on a visit to Vienna in 1973. An obituary in the Long Beach (CA) Independent said that he died in Vienna’s Sofien Hospital “after he suffered an abdominal hemorrhage… Banner and his wife recently bought a home in France and they were in Vienna awaiting a shipment of furniture when the actor was stricken.”

Something in Common with John Banner