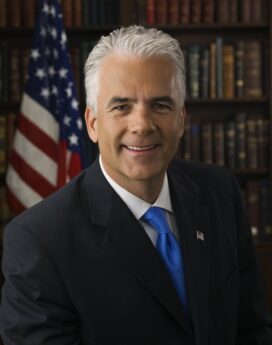 Video from MSNBC on his 2011 announcement

Coverage from the Las Vegas Sun

Sex and Power Inside the C Street House

A critic blames Ensign's troubles on his Christian connections

Republican John Ensign is the U.S. senator from Nevada who went from being known as an up-and-coming party leader in 2008 to notoriety as a scandal-plagued adulterer in 2009. John Ensign was a veterinarian in Las Vegas before being elected to the U.S. House of Representatives in 1994. In Washington he lived in what’s been called the “C Street House,” an apartment building of politically-involved Christians, and in Congress he championed socially conservative causes as well as western interests. Handsome and silver-haired, Ensign was elected to the U.S. Senate in 2000 and re-elected in 2006, and by 2008 he was a policy and campaign leader for the national Republican party. However, on 16 June 2009 Ensign announced that he’d had a sexual affair with Cynthia Hampton, a member of his campaign staff and the wife of Doug Hampton, one of Ensign’s top aides. (Ensign was also married, with three children.) In July it came out that Ensign’s parents had given the Hamptons cash gifts totalling $96,000 in 2008, and in October it was reported that John Ensign was under investigation for possible ethics violations for trying to get Doug Hampton a job. Ensign resigned from leadership posts within the party but at first refused to resign from office. Ensign announced in March of 2011 that he would not seek re-election in 2012, saying, “I have to put my family first.” Finally, on 21 April 2011, he announced that he would in fact resign from the Senate, effective 3 May 2011. Nevada’s Representative Dean Heller was appointed by Governor Brian Sandoval to serve the remainder of Ensign’s term.

The news of John Ensign’s affair was briefly overshadowed by the news of another Republican’s adultery a week later, that of Governor Mark Sanford of South Carolina… John Ensign claimed at the time of his admission that he was coming forward because Doug Hampton had tried to blackmail him, a reference to a letter sent by Hampton to Fox News on 11 June 2009 (but not made public until 19 June).

Something in Common with John Ensign