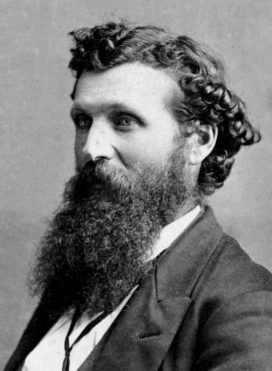 John Muir was an early American conservationist who has been called “The Father of the National Parks System.”

He walked from Indiana to the Gulf of Mexico in 1867 and 1868, ended up in California and began his love affair with the Yosemite Valley.

An eager traveler and indefatigable walker, he also toured Nevada, Utah and Alaska. He settled in California where he wrote, managed a fruit ranch, and campaigned for the establishment of Yosemite National Park, which Congress approved in 1890.

Muir’s descriptions of the rugged glories of the American west influenced the thinking of President Theodore Roosevelt, among many others.

Muir was a co-founder of the Sierra Club and served as its first president from 1892 until his death in 1914. His books include The Mountains of California (1894) and Our National Parks (1901).

Muir (along with an image of Yosemite) is featured on the California state quarter released by the U.S. Mint in 2005… As a young man Muir was a talented wood carver and inventor who built his own clocks.

Something in Common with John Muir