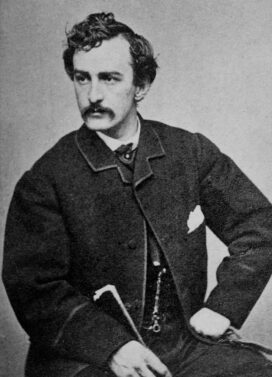 Born in Maryland, Booth was part of a clan of actors: his father, Junius Brutus Booth, toured America and was known for his Shakespearian roles. John Wilkes Booth followed in his father’s footsteps and became a widely-known and well-regarded actor. However, he was a Southerner at heart and sympathized with the Confederacy during the Civil War, although he continued to perform in both South and North.

After the Civil War ended with the North’s victory in 1865, Booth determined to strike a blow in revenge. During a performance of Our American Cousin at Ford’s Theater in Washington, D.C., the actor snuck into the presidential box and shot Abraham Lincoln behind the left ear. Booth leapt down to the stage (breaking the fibula bone in his left leg as he landed) and shouted “Sic semper tyrannis!” (In Latin, “Thus ever to tyrants.”)

John Wilkes Booth escaped with an accomplice and eluded pursuers for 12 days before being cornered in a tobacco shed in Virginia. The shed was set on fire, and in the ensuing confusion, John Wilkes Booth was shot by a Union soldier, Sgt. Boston Corbett. Booth was dragged from the shed alive, but died a few hours later.

John Wilkes Booth was part of a conspiracy; while he shot Lincoln, others were supposed to attack vice-president Andrew Johnson and Secretary of War William Seward. Seward was stabbed but survived; Johnson was never attacked, and became president upon Lincoln’s death. Four of Booth’s co-conspirators were hung on July 7, 1865… Booth had himself appeared on the Ford’s Theater stage many times; Lincoln had actually seen him there in an 1863 performance of The Marble Heart… John Wilkes Booth shot Lincoln five days after the Civil War ended with the surrender of Confederate general Robert E. Lee to the Union’s Ulysses Grant at Appomatox on April 9, 1865.

Something in Common with John Wilkes Booth