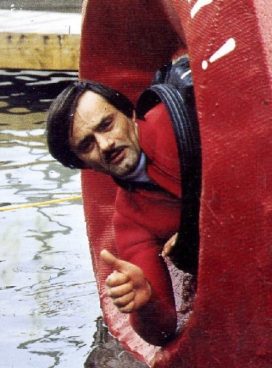 Karel Soucek was a Canadian daredevil known for his 1984 tumble over Niagara Falls in a barrel, and his death seven months later while attempting a stunt in the Houston Astrodome.

Originally from Czechoslovakia, Soucek became a Canadian citizen and made his living as a stunt pilot and motorcycle daredevil before aiming for Niagara Falls in the late 1970s.

After running several test barrels, he made his run on July 2, 1984, successfully riding inside a barrel over Niagara’s Horsehoe Falls, dropping 175 feet in just over three seconds.

He was fined $500 by police and got his name in the news as “the last of the Niagara daredevils.”

In a promotional stunt in Houston’s Astrodome on January 19, 1985, Soucek was to drop 180 feet from the ceiling of the Astrodome into a tank of water just 12 feet in diameter and 9 feet deep. The barrel hit the rim of the tank and shattered, fatally injuring Soucek before a crowd of 35,000 people.