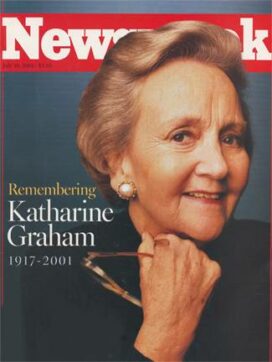 Katharine Graham headed the Washington Post from 1963 until 1993 and was one of the era’s most prominent American women. Graham’s father, the financier Eugene Meyer, bought the Post in 1933 and later passed it on to his daughter’s husband, Philip Graham. When Graham committed suicide in 1963, Katharine Graham became one of the publishing world’s few female executives. During her tenure the paper published the controversial Pentagon Papers and led the way in coverage of the Watergate scandal, which forced the resignation of President Richard Nixon. Graham also became a famous hostess, especially known for her dinner parties for presidents from Lyndon Johnson to George W. Bush. Her 1998 autobiography, Personal History, was awarded the year’s Pulitzer Prize for biography. She died in 2001 from head injuries sustained when she fell on a sidewalk while attending a conference in Idaho.

Something in Common with Katharine Graham