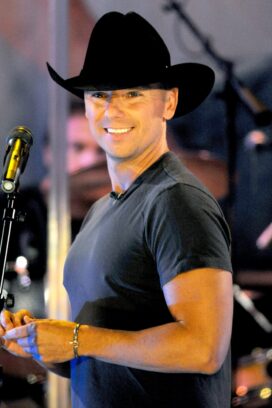 After a decade of building an audience with country hits such as “You Had Me From Hello” and “She Thinks My Tractor’s Sexy,” Kenny Chesney broke through in 2002 with the Nashville-to-Caribbean sound of his album No Shirt, No Shoes, No Problems.

Chesney grew up in Luttrell, Tennessee and in the early 1990s made his way to Nashville, where he found work as a songwriter-for-hire.

His No Shoes album soared to the top of the charts on the strength of the title track and the hit songs “The Good Stuff” and “Young,” and soon enough Chesney was a star on Country Music Television as well as radio.

In 2004 he released When The Sun Goes Down and had another hit with “There Goes My Life.” In 2005 he released Be as You Are (Songs From an Old Blue Chair) and The Road and Radio, and had hits with “Living in Fast Forward” and “Summertime.”

In 2000 Chesney made headlines — and got a shot of free publicity — when he grabbed a policeman’s horse at a New York fair and road off, a prank which was amplified in the press due to the presence of country star Tim McGraw. Chesney said he had the policeman’s permission and was later acquitted of disorderly conduct… In May 2005 Chesney married actress Renee Zellweger, but the couple broke up by September and had the marriage annulled on 20 December 2005.

Something in Common with Kenny Chesney