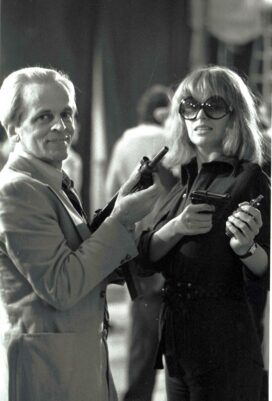 Klaus Kinski was a Polish character actor of international cinema, known mostly for playing eccentric madmen in Werner Herzog‘s Aguirre, the Wrath of God (1972) and Fitzcarraldo (1982). Kinski began his theater career after World War II and got into the movies in the late 1940s. During his career he appeared in hundreds of movies, most of them bad. His sturdy brow, reptilian grin and wild-eyed ferocity meant he usually played a villain on the big screen, and his unbridled performances lit up the screen with an intensity critics might call overacting. His most famous films were made with Herzog and include Nosferatu: Phantom der Nacht (1978), Woyzeck (1979) and Cobra Verde (1988). The height of Kinski’s celebrity came in the early 1980s and coincided with the popularity of his daughter, model and actress Nastassja Kinski. Klaus became known to American audiences by way of art house showings of Herzog’s movies, and from Kinski’s appearances in The Soldier (1982), Android (1983) and The Little Drummer Girl (1984, starring Diane Keaton). Some of his other movies are Dr. Zhivago (1965); For a Few Dollars More (1965); Zoo zéro (1979); and Buddy Buddy (1981, starring Walter Matthau and Jack Lemmon).

Kinski, a Pole, was forced into the German army during World War II and spent the remaining months of the war in a British prison camp… Herzog released a documentary in 1999 on his tumultuous relationship with Kinski, titled My Best Fiend.

Something in Common with Klaus Kinski