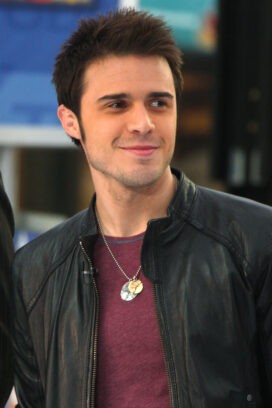 Kris Allen is a singer from Conway, Arkansas and the winner of the eighth season of American Idol, the televised competition whose past winners include Kelly Clarkson, Clay Aiken and Carrie Underwood. Allen grew up in a small southern town, where he played in the orchestra but didn’t begin performing solo until his last year of high school. After three years of college he left to pursue music and ended up releasing a self-produced CD in 2007 (Brand New Shoes). On American Idol in 2008 and 2009, Allen was cast as the dark horse alternative to front-runner Adam Lambert. Allen’s modestly delivered acoustic versions of pop songs contrasted with Lambert’s southern California rock performances; fans’ cries of judge bias toward Lambert died when viewers chose Allen as the season champ.

Allen’s fans adopted the term “kick awesome” as a rallying cry during the show’s run, a term used by Allen to describe his Idol experience (“kick awesome” is good)… Allen was married in 2008 and is the first American Idol winner to be married.

Something in Common with Kris Allen