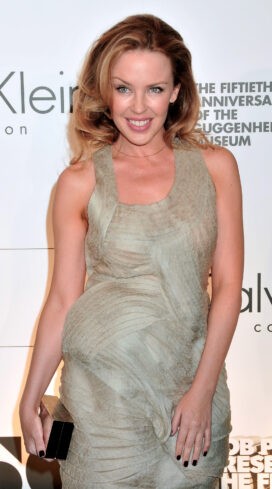 Kylie Minogue is 54 years old
Born: May 28, 1968
Birthplace: Melbourne, Australia
Best known as: Singer of "Spinning Around" and "The Locomotion"
Buy from Amazon.com: Kylie Minogue DVDs and streaming video

A pop music star with a touch of disco queen, Kylie Minogue was by some counts Europe’s biggest-selling female pop musician of the 1990s. She appeared in the 1980’s Australian soap opera Neighbors and parlayed that role into a recording career; her first hit was the 1987 remake of the Little Eva hit Locomotion. She went on to become a major pop presence on radio, TV, and magazine covers in Australia and Europe (though she has never been a major hit in America). Her albums have included Kylie (1988), Rhythm of Love (1990), Impossible Princess (1997), and Light Years (2000). Her 2000 hit single “Spinning Around” put her back at the top of the pop charts, and she had a cameo appearance as the Green Fairy in the 2001 movie Moulin Rouge (with Ewan McGregor and Nicole Kidman).

“Spinning Around” was penned by Kara DioGuardi and Paula Abdul… In May of 2005 Minogue had surgery for early-stage breast cancer; the surgery was declared a success, but she cancelled a planned Australian tour that year… Her sister, Danni Minogue, also is a pop singer… Kylie Minogue was featured in the closing ceremonies of the 2000 Summer Olympics in Sydney, Australia.

Something in Common with Kylie Minogue