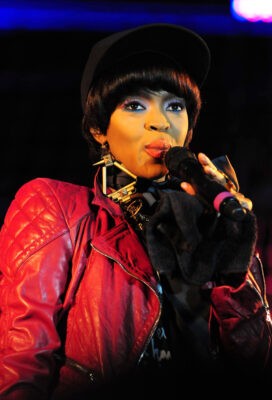 Archive of articles about (or mentioning) Hill

Slick and informative site from her record label

Whatever Happened to Lauryn Hill?

People magazine asks the question in 2008

Lauryn Hill was the singer for the Fugees, an ambitious and groundbreaking hip-hop trio which also included Pras Michel and Wyclef Jean. Their Grammy-winning second album, The Score, reached #1 on the Billboard charts in 1996 and included a popular cover of the Roberta Flack song "Killing Me Softly." The album’s success, and Hill’s subsequent appearance in the movie Sister Act 2, thrust her into the limelight. The Fugees broke up in 1997 and Hill’s first solo album, The Miseducation of Lauryn Hill (1998), was a huge critical and popular success that won 10 Grammy Award nominations. It was her first and only studio album to date. Hill’s next record, the live and acoustic MTV Unplugged No. 2.0, didn’t meet the high expectations of fans and Lauryn Hill withdrew from public life, dissatisfied with the pressures of celebrity. In 2005 she reunited with The Fugees and released the single “Take It Easy,” although a full Fugees reunion album never quite happened and the band again broke up.

Lauryn Hill has five children with Rohan Marley, son of reggae legend Bob Marley: Zion David Hill-Marley (born 1997), Selah Marley (b. 1998), Joshua Marley (b. 2002), John Marley (b. 2003) and a baby girl born in 2008, whose name she has not publicly revealed… She and Marley have never married… On Hill’s 1998 single “Everything is Everything”, future solo star John Legend plays piano.

Something in Common with Lauryn Hill