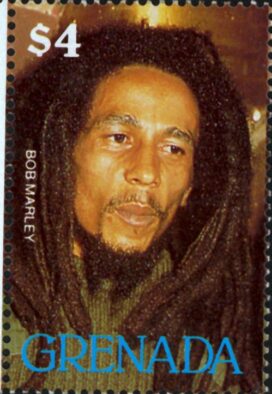 Bob Marley was the world’s first reggae superstar. He was part of the Jamaican group The Wailers, along with reggae greats Bunny Livingston and Peter Tosh.

Bob Marley, a Rastafarian, gained early attention in the late 1960s and early ’70s for writing hits recorded by others, including “Stir It Up” (recorded by Johnny Nash) and “I Shot The Sheriff” (a hit for Eric Clapton). But then he came into his own international fame with songs that spoke of politics, religion and life on the streets, including his anthemic “Get Up, Stand Up.”

Marley became a global superstar known for his Rastafarian style: dreadlocked hair, slouch hats, and Jamaican colors of red, green and gold. As his music spread around the world, his image also proliferated on T-shirts and posters.

Marley died at the young age of 36, after a melanoma (or skin cancer) spread from his toe to his brain and lung. A greatest hits compilation titled Legend was released in 1984; it sold millions and earned a reputation as the reggae album owned by people who own just one reggae album. He was inducted into the Rock ‘n Roll Hall of Fame in 1994.

Bob Marley married Alpharita Constantia “Rita” Anderson on February 10, 1966. They had four children together: Cedella (born 1967), David (known as Ziggy, b. 1968), Stephen (b. 1972) and Stephanie (b. 1974). Bob Marley also adopted Rita’s daughter Sharon (b. 1964)… Rita Marley, Ziggy Marley, Stephen Marley and Cedella’s son Skip Marley have all had musical recording careers of their own… The melanoma that killed Bob Marley was discovered in 1977 after he injured the toe during a soccer game; he reportedly refused to have the toe amputated as recommended by doctors, and over the next four years the cancer spread until it ended his life.

Something in Common with Bob Marley