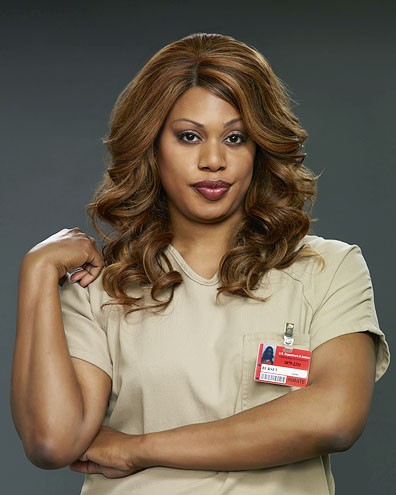 Laverne Cox is an Emmy-nominated actress and a transgender advocate — “the first trans woman of color to have a leading role on a mainstream scripted television show,” as her official bio puts it. That TV show was the dramatic comedy Orange Is the New Black, in which Cox played the recurring role of Sophia Burset, a beautiful transgender prisoner in a women’s prison.

Laverne Cox was born in Mobile, Alabama. She attended the Alabama School of Fine Arts and spent two years at Indiana University before finishing college at Manhattan Marymount College in New York. It was after arriving in New York that she began the transition to female, and changed her focus from dance to acting.

She had a few small film and TV parts in the early 2000s, but her first prominent role was as a contestant for two episodes on the reality TV show I Want to Work for Diddy (2008, with Sean Combs). Tall, elegant and striking, she took a variety of guest roles until she landed the role of Sophia in Orange is the New Black in 2013. She appeared in all seven seasons of the show, which ended in 2019. She was nominated four times for an Emmy Award as the outstanding guest actress in a drama series, in 2014, 2017, 2019 and 2020 (each for the show year preceding it). She didn’t win, but the Television Academy called her the “first openly transgender person to be nominated for a Emmy Award in any acting category, and the first to be nominated for an Emmy Award since composer Angela Morley in 1990.”

Orange is the New Black raised Laverne Cox’s profile, and she became a popular TV talk show guest and public speaker on transgender issues. In 2014 she was Emmy-nominated as outstanding guest actress in a comedy series, for the episode “Lesbian Request Denied.” The same year she was on the cover of Time magazine’s June 9 issue, next to the headline “The Transgender Tipping Point.”

Many sources used to report Laverne Cox’s year of birth as 1984, but Laverne Cox was born in 1972. Who2 research uncovered her actual birth year in this 2015 report. Her birthday of May 29 was reported by Playbill in 2014… Laverne Cox’s twin brother is the avant-garde artist and musician M. Lamar. He played her as a pre-transition male in one episode of Orange Is the New Black; in the story, Sophia had been a fireman named Marcus Burset… Laverne Cox doesn’t publicly reveal her birth name; the print version of a 2014 Mobile Press-Register interview with her mother, Gloria, gave her birth name as Roderick Leverne Cox. Laverne Cox has separately written that Laverne was her original middle name (although the spelling, Leverne, is slightly different) and Cox her original last name.

Something in Common with Laverne Cox