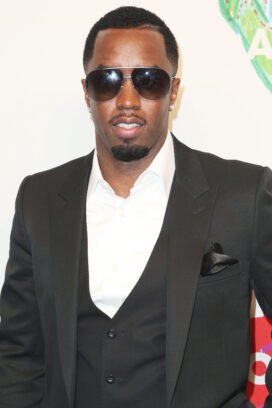 Sean “Puffy” Combs, also known as P. Diddy or Diddy, is a hip-hop performer, producer and businessman known for hit records, a clothing line, movie roles and occasional gossip column appearances. He had early training working for record companies, then set off on his own with Bad Boy Entertainment. Together with the late rapper Notorious B.I.G., Combs (performing as Puff Daddy) popularized the east coast sound of American hip-hop. In 1997 Puff Daddy sampled the Police song “Every Breath You Take” for his song “Missing You” (a tribute to the Notorious B.I.G.) and the crossover hit made him a household name. His solo album No Way Out was a Grammy-winning success, and Combs earned a reputation as an astute workhorse and jack-of-all-trades in the recording industry. His list of musical collaborations includes a who’s who of top artists such as Mariah Carey, Usher, Missy Elliott and David Bowie. As an actor, Combs has appeared in the feature film Monster’s Ball (2001, with Halle Berry and Billy Bob Thornton) and the Broadway play A Raisin in the Sun (2004, remade as a TV movie in 2008).

In 2001 Combs announced that he was changing his nickname from Puff Daddy to P. Diddy, earning him comparisons to fellow name-changing musician Prince… His romance with singer/actress Jennifer Lopez was closely followed in gossip columns; the two broke up in 2001. That same year Combs went on trial for weapons charges stemming from a 1999 Manhattan nightclub shooting in which three people were injured; at trial’s end he was acquitted of all charges… In 2005 Combs announced that he was again changing his name, settling on simply Diddy. In 2006 he was prompted to change his name following a lawsuit filed by English music producer Richard “Diddy” Dearlove; Combs settled out of court and agreed to release his 2006 album Press Play under the name Diddy in the U.S., but under P. Diddy in the U.K.

Something in Common with Sean Combs