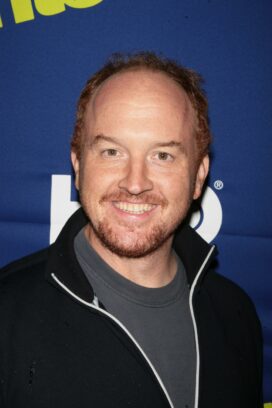 Louis C.K. is a writer and actor who gained his greatest fame in the cable comedy series Louie, a sitcom based on his life as a stand-up comedian and divorced father of two.

While paying his dues as a comic in Boston and New York, Louis Szekely (“C.K.” is supposedly a stage name version of his Hungarian surname) got the attention of Robert Smigel and Conan O’Brien in the early 1990s, just as Late Night with Conan O’Brien was about to replace David Letterman on network TV. Louis C.K. was an aspiring filmmaker as well as a comedy writer, and within a few years his short films, audience appeal and hard-working approach paid off. By 1996 he had a special on HBO, and his first TV series, the short-lived Lucky Louie.

Working his way along, Louis C.K. wrote for Chris Rock and got a second Emmy nomination (his first was with Conan), then had cable TV specials, appeared in movies (2009’s The Invention of Lying), was a semi-regular in TV shows (Parks and Recreation, as Amy Poehler‘s suitor) and toured as a stand-up comedian with as many TV guest spots as possible.

His cable series Louie debuted in 2010, making Louis C.K. an overnight success after 25 years in the business. Louis C.K., a.k.a. “the ginger comic,” is known for his ability to joke cynically — even harshly — about modern life, while managing to avoid, for the most part, sounding mean. Louis C.K. has also demonstrated an internet-savvy business sense over the years, having great success selling concert DVDs and live performance tickets directly to online fans. For his work on Louie, he was nominated for an Emmy as an actor as well as a writer (2011).

In 2017, The New York Times published a story in which five different women said Louis C.K. had performed uninvited sexual acts in front of them. The story came on the heels of similar public accusations of sexual harassment against producer Harvey Weinstein and actor Kevin Spacey, and just as a Louis C.K.’s film I Love You Daddy was about to be released.

Louis C.K.’s real name is Louis Szekely, and he is of Mexican-Hungarian descent… His grandfather was a Hungarian who settled in Mexico and married a native. Louis’s dad was born in Mexico City and went to grad school at Harvard, where he met Louis’s mother (a summer student from Michigan). Louis spent the first 6 or 7 years of his life in Mexico City, but then his folks split up and he grew up in Newton, Massachusetts… The music for Louie is done by Reggie Watts.

Something in Common with Louis C.K.