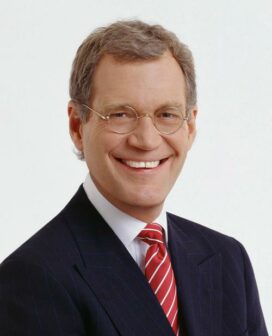 David Letterman was a late-night TV show host for more than 30 years. His show Late Night With David Letterman premiered in 1982 on NBC, where it followed the famed Tonight Show hosted by Johnny Carson. Letterman’s show ran until 2015, becoming a huge hit with college students and night owls, justly famous for its offbeat humor and nightly “Top Ten” lists.

David Letterman’s background was eclectic: he graduated from Ball State University in Muncie, Indiana in 1969, and was once an all-purpose announcer on station WLWI in Indianapolis, a job which included introducing movies and serving as a substitute weatherman. He worked his way into stand-up comedy (appearing on Carson’s show in 1978) and wrote and performed on various comedy shows, including his own failed morning show on NBC.

But he clicked almost immediately in the late-night spot, and his show was a hit throughout the 1980s. Letterman later made no secret of his wish to host the Tonight Show once Carson retired; when NBC gave that job to Jay Leno instead in 1992, Letterman jumped to CBS and began the competing The Late Show with David Letterman. His sidekick on the show was pianist Paul Shaffer, Letterman’s music director since the debut of Late Night in 1982.

Letterman remained a fixture in the time slot for the next 23 years. There were a few bumps along the way: on October 1, 2009, Letterman stunned his audience by announcing on his show he was the victim of an extortion attempt by a CBS employee, who threatened to reveal that Letterman had slept with unnamed female staffers from his show. Letterman admitted that the claim was true, and the incident eventually blew over.

On March 3, 2014, he announced on the air that he would retire in 2015; his final show aired on May 20, 2015. He was succeeded as host by Stephen Colbert, whose first show as host of the The Late Show aired later that year.

Shortly after leaving the show, Letterman gained attention for growing a flowing white Santa Claus-style beard. A few years later, he began a streaming interview show called My Next Guest Needs No Introduction with David Letterman. His first guest, in an episode released on January 12, 2018, was former President Barack Obama.

Something in Common with David Letterman