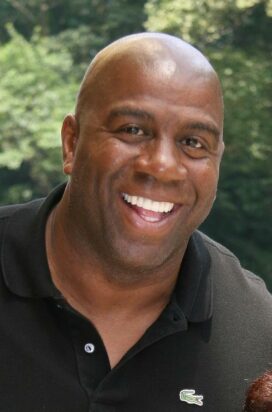 Earvin “Magic” Johnson led the Los Angeles Lakers to five national championships in the 1980s, then abruptly retired from basketball in 1991 after announcing that he had the human immunodeficiency virus (HIV). Magic Johnson grew up in Lansing, Michigan and was a standout player at Lansing’s Everett High School. He then led Michigan State University to a national championship in 1979 when he was just a sophomore. He turned pro the next year and spent his entire career with the Lakers, including a couple of comebacks after his retirement and a short stint as a coach (at the tail end of the 1993-94 season). The rivalry between Magic’s Lakers and Larry Bird‘s Boston Celtics helped make the NBA a worldwide success in the 1980s, and the Lakers won championships in 1980, ’82, ’85, ’87 and ’88. Johnson played in 12 All-Star Games, was the league’s Most Valuable Player three times (1987, ’89 and ’90) and was a member of the USA “Dream Team” that won gold at the 1992 Olympics (after he’d announced his retirement). His enthusiasm for basketball and flashy play made him a crowd favorite and one of the most popular faces of the NBA. Since retiring he has appeared on TV as a sports analyst and kept busy running Magic Johnson Enterprises, a collection of business interests that includes movie theaters, restaurants and fitness centers. In 2012 he joined a group that bought the Los Angeles Dodgers, becoming a part-owner of that baseball team.

Magic Johnson, at 6′ 9″, was the biggest point guard in the NBA… In his career he scored 17,707 points, retrieved 6,559 rebounds and made 10,141 assists… Magic Johnson was inducted into the Naismith Memorial Basketball Hall of Fame in 2002… How did Magic Johnson get his nickname? According to NBA.com, “Johnson was first called ‘Magic’ when he was a star at Everett High School. He was given the nickname by a sports writer who had just seen the 15-year-old prepster notch 36 points, 16 rebounds and 16 assists. (Johnson’s mother, a devout Christian, thought the nickname was blasphemous.)”

Something in Common with Magic Johnson