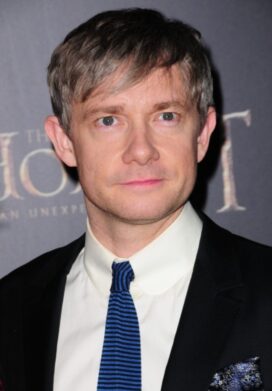 English actor Martin Freeman is best known for his role as Bilbo Baggins in The Hobbit film trilogy (2012-14), and for his TV role as Dr. Watson in the BBC series Sherlock.

Martin Freeman began his career in British TV comedies in the late 1990s, and his first big break came in 2001, playing nice-guy Tim in the original version of The Office (starring Ricky Gervais).

The series ended in 2003, but then became popular in the U.S. at the same time that Freeman earned notice on the big screen in the comedies Love Actually (2003) and Shaun of the Dead (2004).

He starred in the film version of Douglas Adams‘s The Hitchhiker’s Guide to the Galaxy in 2005, then took on serious roles in the BBC series The Robinsons (2005) and the feature film Nightwatching (2007, Freeman played Rembrandt).

Freeman’s turn on TV as Watson, sidekick to Sherlock Holmes (played by Benedict Cumberbatch), began in 2010; He won an Emmy Award in 2014 as outstanding supporting actor in a miniseries or movie.

His work in that series captured the attention of filmmaker Peter Jackson, who cast Freeman as the nervous-but-game-for-adventure Bilbo Baggins for the Hobbit series of films, prequels to Jackson’s trilogy of films based on J.R.R. Tolkien‘s The Lord of the Rings. T

Something in Common with Martin Freeman