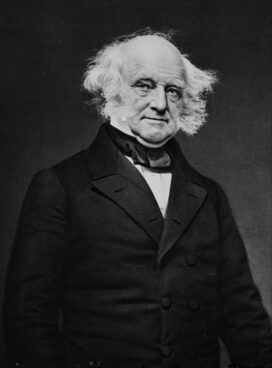 Martin Van Buren was a U.S. Senator and governor of New York, and one of the founders of the Democratic Party. Under Andrew Jackson, Van Buren served as Secretary of State, Minister to England and Vice President. Shortly after Van Buren took office a financial panic in 1837 forced several bank closures. Van Buren ran for re-election in 1840, but was defeated by the Whig candidate, William Henry Harrison.

The eighth president of the U.S., Van Buren was nicknamed “The Little Magician” for his political skills (and small frame)… He was a widower with four sons when he moved into the White House (his wife, Hannah, died in 1819)… He was also called “Old Kinderhook” after his hometown, and that nickname is supposed to have given rise to the term “OK”… Washington Irving wrote most of “The Legend of Sleepy Hollow” while staying at Van Buren’s home Lindenwald in Kinderhook.

Something in Common with Martin Van Buren