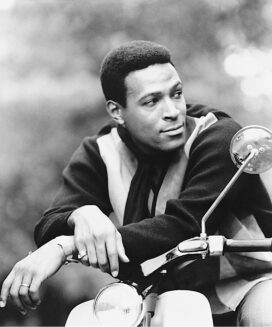 Marvin Gaye was an African-American soul singer whose hits included “How Sweet It Is to Be Loved by You,” “Mercy Mercy Me (the Ecology)” and “Sexual Healing.”

Gaye worked with just about everyone in the R&B business, writing and recording mostly mid-tempo romantic ballads, as well as duets with the likes of Tammi Terrell (“Ain’t No Mountain High Enough,” among others) and Diana Ross. He began to exercise more control over his recordings in the 1970s, and his 1971 album What’s Going On showed he was a composer interested in more than hit singles.

What’s Going On was a politically inspired album that spawned the top hits “What’s Going On,” “Inner City Blues (Make Me Wanna Holler),” and the “Mercy Mercy Me (the Ecology).”

Always moody and a little distant from the public, Gaye fell on hard times in the late 1970s. Following two divorces, money troubles and bouts of depression, he made a comeback in 1982 on the Columbia Records label with the single “Sexual Healing” from the album Midnight Love.

The record was a Grammy-winning hit that put Gaye back into the spotlight, but he continued to be plagued by drug addiction and money trouble. After living in Europe and dodging the Internal Revenue Service for a couple of years, he moved in with his parents in Los Angeles. On 1 April 1984 he was shot in the chest and killed by his father after a heated argument. Gaye was inducted into the Rock and Roll Hall of Fame in 1987.

Gaye sang the national anthem at the 1983 NBA All-Star Game. His rendition became a sought-after bootleg recording… His father was convicted of voluntary manslaughter and received a suspended sentence with probation; he died in 1998… “I Heard It Through the Grapevine” was used in a popular 1980s commercial featuring The California Raisins… “How Sweet It Is (To Be Loved By You” was also a hit for James Taylor.

Something in Common with Marvin Gaye