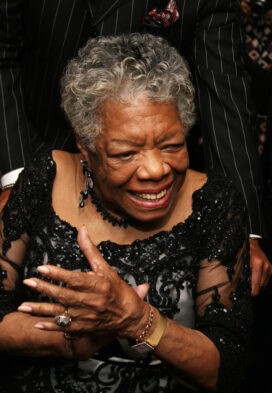 Maya Angelou’s 1969 autobiography, I Know Why The Caged Bird Sings, was nominated for a National Book Award and made her a symbol of pride for Black Americans.

In the 1950s, Maya Angelou had been a dancer and stage actress, and she was active in the civil rights movement. She became a coordinator for the Southern Christian Leadership Conference, thanks to a request from Martin Luther King, Jr. During the 1960s she spent five years in Africa, working as a journalist and a teacher.

Meanwhile, she was writing. Maya Angelou returned to the United States and in 1969 published I Know Why The Caged Bird Sings. In 1972 she was nominated for a Pulitzer Prize for her collection of poetry, Just Give Me a Cool Drink of Water ‘fore I Diiie.

In the following years, Angelou continued teaching, writing, acting, producing, recording (she won Grammy Awards for the spoken word for the years 1993, 1995 and 2002) and collecting honorary degrees from across the United States. In 1981 she became the Reynolds Professor of American Studies at Wake Forest University in North Carolina.

At Bill Clinton’s request, Angelou wrote a poem — On the Pulse of Morning — for his 1993 inauguration as U.S. president. She was awarded the Presidential Medal of Freedom by President Barack Obama in 2011, three years before her death.

Maya Angelou was nominated for an Emmy for her role in the 1977 TV miniseries Roots, based on Alex Haley‘s novel; she played Kunta Kinte’s grandmother… She also appeared with Janet Jackson and Tupac Shakur in the 1993 film Poetic Justice, and with Winona Ryder in the 1995 film How To Make an American Quilt… Maya Angelou was honored with a Google Doodle on April 4, 2018 — the 90th anniversary of her birth…

Something in Common with Maya Angelou