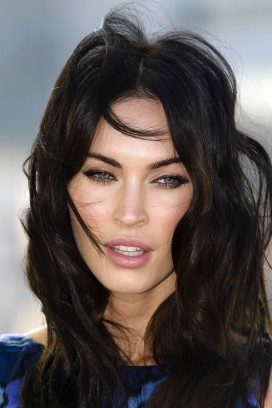 Megan Fox is best known as the toothsome grease monkey in Transformers (2007, starring Shia LaBeouf) and its sequel Transformers: Revenge of the Fallen (2009). Fox played Lindsay Lohan‘s rude nemesis in Confessions of a Teenage Drama Queen (2004), then earned praise for her comic sensibilities on the TV sitcom Hope & Faith (Fox replaced actress Nicole Paggi in the second season and was on the show from 2004-06). Early in her career Fox was a favorite of cheesecake magazines, and the success of Transformers cemented her status as a pin-up girl of the tomboy variety; FHM magazine named her the sexiest woman in the world in its 2008 poll. She starred as a killer cheerleader in the 2009 comic horror film Jennifer’s Body, and her other films include This is 40 (2012) and Teenage Mutant Ninja Turtles (2014). Megan Fox married actor Brian Austin Green on 24 June 2010. Their son, Noah Shannon Green, was born on 27 September 2012, and a second son, Bodhi Ransom Green, was born on 12 February 2014.

Megan Fox has a tattoo on her right shoulder reading, “We will all laugh at gilded butterflies.” It appears to be inspired by a line from act 5, scene 3 of William Shakespeare‘s play King Lear: “So we’ll live / And pray and sing and tell old tales and laugh / At gilded butterflies.”

Something in Common with Megan Fox