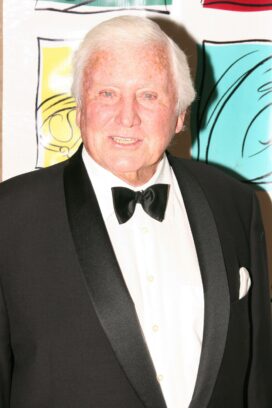 Merv Griffin was the television host and entrepreneur who started two of the most famous game shows in American TV history: Jeopardy! and Wheel of Fortune.

Merv Griffin began his entertainment career in San Francisco radio, and became a singer with Freddy Martin’s orchestra in the late 1940s. Between 1962 and 1986, Griffin had his own TV talk show in various formats, and he aired thousands of interviews with celebrities and newsmakers.

Behind the scenes he was a savvy producer of game shows and a wise business investor. He started Merv Griffin Productions in 1964 and came out with the game show Jeopardy! (hosted by Art Fleming). The show was a daytime TV staple for a decade, and when it ended in 1975, Griffin started Wheel of Fortune (hosted by Pat Sajak). Jeopardy! was brought back to TV in 1984, in the edition that ran well into the 21st century and made host Alex Trebek a legendary figure.

Both shows — and other business deals — made Griffin hundreds of millions of dollars. By the late 1980s he was challenging Donald Trump in the casino-hotel business and surprising the public with the news that Merv was, in fact, a very rich guy.

Once parodied for being too cheery and fawning with his guests, he was later praised for his exuberance as an entertainer, and for his many innovations during his six decades in broadcasting. He stayed active until the end: his last game show, Merv Griffin’s Crosswords, began airing shortly after his death in 2007.

Merv Griffin was married to the former Julann Wright from 1958 until their divorce in 1976. They had one son, Tony Griffin, born in 1959… Merv Griffin and Freddy Martin had a hit in 1950 with the novelty song “I’ve Got a Lovely Bunch of Coconuts”… Merv Griffin won a Lifetime Achievement Emmy in 2005… He said the original “ask the answers” idea for Jeopardy! came from his wife at the time, Julann Wright.

Something in Common with Merv Griffin