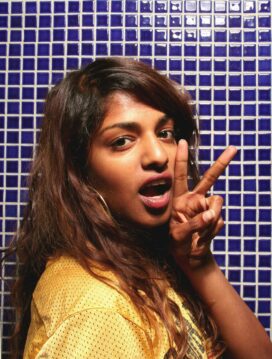 M.I.A is the performing name of Maya Arulpragasam, an artist and singer known for the dancehall hits “Galang” and “Paper Planes.”

Maya Arulpragasam grew up in Sri Lanka in a family that was among the Tamil minority. Political upheaval spurred her mother to apply for refugee status in Britain, and in 1986 the family moved to London.

Arulpragasam studied film at Central Saint Martins College of Art and Design and began her career as a documentary maker.

After discovering the joys of a drum machine, she began writing her own songs and distributing mix-tapes and singles on her own under the name M.I.A.

Blending hip-hop and reggae rhythms with politicized lyrics, her singles “Galang” and “Sunshowers” became dancehall and DJ favorites in 2003 and 2004.

Music videos and word of mouth helped boost the anticipation of her first album, Arular, released internationally in 2005. She also made news at the 2009 Grammy Awards, when she performed onstage while nine months pregnant with her first child (the child was a son, Ikhyd Edgar Arular Bronfman, born to M.I.A and her then-boyfriend,  American Ben Bronfman).

In 2012, M.I.A. performed with Madonna at the Super Bowl, and on live television M.I.A. used a generalized, vulgar gesture (she showed one finger of one hand to the camera). The Federal Communications Commission received 222 complaints and ESPN sued M.I.A. for more than $16 million in damages. The case was settled for an undisclosed amount.

Her stage name is variously spelled MIA, M.I.A and M.I.A. On her official site, she spells it “M.I.A” with no period after the ‘A’… In military argot, “M.I.A.” stands for “missing in action”… M.I.A was born in London to Sri Lankan parents. Her family moved back to Sri Lanka when she was an infant, then later returned to England again… M.I.A caused a ruckus at the 2012 Super Bowl when she made an obscene gesture to cameras while performing with Madonna on the tune “Give Me All Your Luvin’.”

Something in Common with M.I.A.