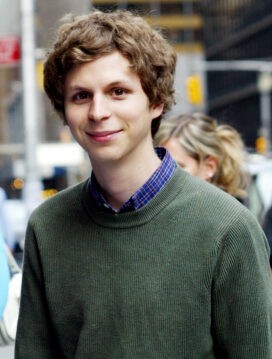 Keeping track of his own doings

Will Michael Cera Ever Grow Up?

2010 article from The New York Observer

Fan site that keeps track of his doings

Canadian actor Michael Cera is best known as the guileless and gawky teenager from the TV series Arrested Development and the films Superbad and Juno.

Cera began acting when he was in grade school, and when he landed the part in 2002 of George-Michael Bluth in Arrested Development, he left high school in Brampton, Ontario and moved to Los Angeles.

The show ran three seasons and Cera got busy on a comedy career, making an online series for CBS called Clark and Michael, doing comedy improv, and appearing in short films.

He made the jump to feature films with two successes in 2007: Superbad, the teen comedy with Jonah Hill and Seth Rogen, and Juno, the indie hit starring Ellen Page.

Since then Cera’s boy-man charisma has made him a sometime leading man of the “indie” class. His other films include Extreme Movie (2008), Nick and Norah’s Infinite Playlist (2008), Youth in Revolt (2009, with Steve Buscemi), Scott Pilgrim vs. the World (2010, with Anna Kendrick and Mary Elizabeth Winstead),  The Lego Batman Movie (2017, as the voice of Robin) and Molly’s Game (2017, starring Jessica Chastain).

Cera had a brief part in the George Clooney-directed film Confessions of a Dangerous Mind (2002), as the young Chuck Barris.

Something in Common with Michael Cera