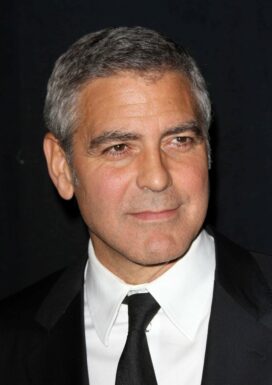 George Clooney spent 10 years as an acting unknown until his role as Dr. Doug Ross in the hospital drama E.R. made him TV’s hottest heartthrob in 1994. He left the show in 1999 and moved on to an even more successful career in films as an actor, producer, director. For the next 15 years he was one of Hollywood’s biggest hunks (onscreen) and most enduring bachelors (offscreen) until his 2014 marriage to Amal Alamuddin.

George Clooney comes from a show business family: he’s the nephew of singer Rosemary Clooney and the son of newscaster and chat host Nick Clooney. His films include Steven Soderbergh‘s Out of Sight (playing charming bank robber Jack Foley), the Coen brothers’ comedy O, Brother, Where Art Thou? (2000, with Holly Hunter), and the heist films Ocean’s Eleven, Ocean’s Twelve and Ocean’s Thirteen (2001, 2004 and 2007) with Brad Pitt and Don Cheadle).

Clooney’s feature directing debut was Confessions of a Dangerous Mind, the 2002 film based on the writings of game show impresario Chuck Barris. In 2005 he co-wrote, directed and acted in Good Night, and Good Luck, the biographical feature about newsman Edward R. Murrow (played by David Strathairn). The film earned Clooney Oscar nominations in 2006 for writing and directing. The same year he won the Oscar as best supporting actor for his role as a CIA agent in the political thriller Syriana.

Clooney also directed and starred in the football comedy Leatherheads (with John Krasinski) in 2008. His other films include the animated comedy The Fantastic Mr. Fox (2009), the political thriller The Ides of March (2011, with Ryan Gosling), The Descendants (2011), the space opera Gravity (2013, with Sandra Bullock), and the World War II art flick Monuments Men (2014). He won his second Oscar in 2013 as a co-producer of the 2012 film Argo, which was named the year’s best picture.

George Clooney married Amal Alamuddin on 27 September 2014, after an engagement of five months. She is an international lawyer who specializes in human rights issues; she was born in Beirut, Lebanon and was practicing with the London firm of Doughty Street Chambers when they became engaged. She took the name Amal Clooney after their marriage. Their children, twins named Ella and Alexander, were born on June 6, 2017.

George Clooney was married to actress Talia Balsam from 1989 until their divorce in 1992. She is the daughter of actors Martin Balsam and Joyce Van Patten… George Clooney and Jason Alexander both had roles in a 1984 medical sitcom titled, coincidentally, E/R… Politically outspoken and left-of-center, George Clooney has had an off-and-on feud with TV personality Bill O’Reilly… George Clooney owned a Vietnamese pot-bellied pig name Max for 18 years, from 1988 until its death in 2006… George Clooney has twice been named the “sexiest man alive” by People magazine: in 1997 and in 2006.

Something in Common with George Clooney