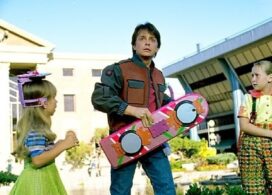 Official site of his Parkinson's-fighting organization

Fox talks about stem cell research with ABC News in 2006

Back To The Future

Fine list of all his film and TV projects

Michael J. Fox is the boyish movie star who became a public advocate for Parkinson’s Disease research after developing the disease himself in 1998. As an actor, Fox’s specialty was an earnest and ambitious charm, a trait he put to good use while playing the buttoned-down youngster Alex P. Keaton in the 1980s comedy series Family Ties. The show was a springboard for Fox, who hit big screen stardom as time-traveling teen Marty McFly in the hugely successful Back To The Future film series: Part I (1985), Part II (1989) and Part III (1990). After several feature films, including a few turns at drama (1987’s Light of Day and 1989’s Casualties of War), Fox returned to television in the political sitcom Spin City (1996-2001). Fox shocked his fans in 1998 when he announced he was suffering from Parkinson’s Disease. In the years since, he has been the public face for the Michael J. Fox Foundation for Parkinson’s research and been on screen occasionally, notably a guest spot in the Denis Leary television drama Rescue Me in 2009. Fox’s 2002 memoir was titled Lucky Man.

Michael J. Fox is sometimes compared to Christopher Reeve, the Superman actor who became an advocate for scientific research after being paralyzed in a riding accident… Fox dropped out of high school in 12th grade, but received his GED in 1995… Michael J. Fox made the cars of John DeLorean famous when he drove one in the Back To The Future films.

Something in Common with Michael J. Fox