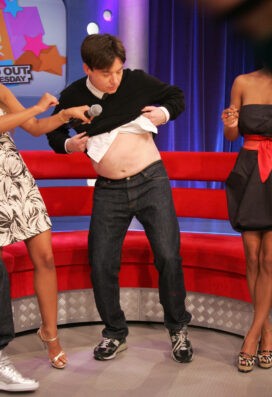 Mike Myers is the gleeful creator and star of the spoofy-mod Austin Powers film series. A former child actor and member of the Second City comedy troupe, Myers joined the cast of Saturday Night Live in 1988, hitting paydirt with characters like the gossipy Linda Richman (host of “Coffee Talk”) and the absurd Dieter, German modernist and host of “Sprockets.” Next Myers turned to the movies, writing and starring in the 1992 hit Wayne’s World (based on his popular SNL skit with Dana Carvey, with the two of them as nerdy high-schoolers), then creating Austin Powers: International Man of Mystery (1997, with Elizabeth Hurley).

Both movies spawned sequels, and Myers was suddenly one of the hottest comedians in the movies. Myers starred in The Cat in the Hat, a live-action feature based on the classic Dr. Seuss tale, in 2003. He also voiced the monster Shrek in the animated movies Shrek (2001) and Shrek 2 (2004).

Austin Powers sequels include The Spy Who Shagged Me (1999) and Goldmember (2002)… Myers played disco entrepreneur Steve Rubell in the 1998 drama 54.

Something in Common with Mike Myers