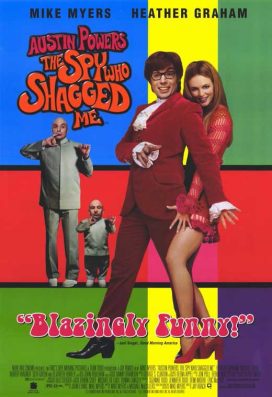 The creation of comedian Mike Myers, Austin Powers is the goofy hero of the 1997 film Austin Powers: International Man of Mystery.

The Austin Powers character is a silly satire of superspy James Bond and an affectionate spoof of the denizens of swinging 1960s London: he wears foppish “mod” clothing, uses outlandish Bond-style secret weapons, and (despite his comically bad teeth) relishes his role as a ladykiller. His arch-enemy is the nefarious Dr. Evil (also played by Myers).

Austin Powers: International Man of Mystery (which co-starred Mimi Rogers and Elizabeth Hurley) was a surprise hit and introduced pop culture catch-phrases like “Groovy, baby!” and “Behave!” It was followed by the sequels The Spy Who Shagged Me (1999, with Heather Graham) and Goldmember (2002, with Beyoncé Knowles as Foxxy Cleopatra).