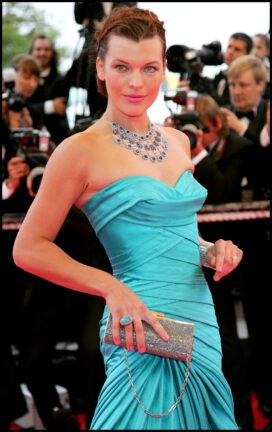 Milla Jovovich is an entertainment industry triple threat: she began modeling at age 11, appeared in the movie Two Moon Junction at age 13, and released her first musical album (The Divine Comedy) at age 18. Her role as Leeloo, the exotic beauty saved by Bruce Willis in Luc Besson’s 1997 fantasy The Fifth Element, kicked her film career into high gear. Jovovich was born in the Ukraine; she and her parents emigrated to the U.S. when she was five. She married Besson in 1997; the two were divorced in 1999. Her other movies include the comedy Zoolander (2001, with Ben Stiller), Dummy (2003, with Jovovich as an aspiring punk rocker), and the video-game crossover Resident Evil (2002, with Michelle Rodriguez) and its sequels Resident Evil: Apocalypse (2004) and Resident Evil: Extinction (2007).

According to her official site, her name is pronounced mee-luh yo-vo-vitch… Milla Jovovich married Paul W.S. Anderson, her director on Resident Evil, on 22 August 2009. She and Anderson have a daughter, Ever Gabo J. Anderson, who was born on 3 November 2007. Jovovich wrote on her blog, “Ever is a Scottish boy’s name… while her middle name Gabo — pronounced ‘Gabeau’ — is a mixture of my parents names! The first two letters are after my mom’s first name, Galina and the last two letters are after my dad’s first name Bogie!” Note that Anderson is not the Paul Anderson who directed Boogie Nights and Magnolia; that’s Paul Thomas Anderson… Jovovich played Joan of Arc in the 1999 movie The Messenger.

Something in Common with Milla Jovovich