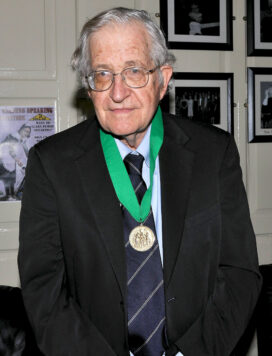 Noam Chomsky is a leading linguistic scientist and a longtime professor at the Massachusetts Institute of Technology (MIT). His 1957 book Syntactic Structures outlined his theories of transformational generative grammar and made him a prominent and controversial figure in the field. Chomsky is also known as a political activist suspicious of big media, big business and big government. His books include Manufacturing Consent (1988) and Propaganda and the Public Mind (2001). He is sometimes compared with another scholarly activist, Bertrand Russell.

Chomsky was the inspiration for the name given the sign-language chimp Nim Chimpsky.

Something in Common with Noam Chomsky