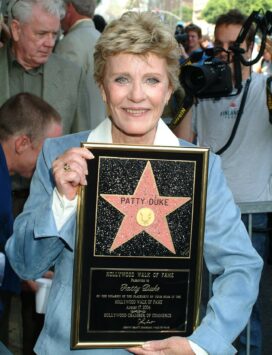 Actress Patty Duke was a star of stage, screen and television from her childhood almost until her death in 2016.

As a child star, Patty Duke was famous for her portrayal of Helen Keller in the 1962 film The Miracle Worker. She first played the role on Broadway in 1959, with Anne Bancroft as Keller’s teacher Anne Sullivan; the film version won Oscars for both Duke (as best supporting actress) and Bancroft (as best actress).

Next came the sitcom The Patty Duke Show, with teenaged Patty Duke playing identical cousins from different backgrounds: one a rambunctious regular kid from Brooklyn, the other an elegant brainiac from Scotland. The show was a popular family hit from 1963-66.

Patty Duke continued her acting career into adulthood, making something of a specialty of TV movies. She was married to the actor John Astin (famous for playing Gomez on TV’s The Addams Family) from 1972-85; their sons Sean and Mackenzie also are actors. (Sean Astin played Sam Gamgee in the popular Lord of the Rings movies in the 2000s.)

In the early 1980s Duke was diagnosed with manic depression; she published a book about the disease in 1992, titled A Brilliant Madness. She received a star on the Hollywood Walk of Fame in 2004.

Like Ronald Reagan and Ed Asner, Patty Duke served as president of the Screen Actors Guild (1985-88)…. Also like Reagan, she played the president of the United States, in the TV series Hail to the Chief (1985)… Patty Duke was a regular panelist alongside Richard Dawson and Charles Nelson Reilly on The Match Game in the 1970s… During her marriage to John Astin, she was known professionally as Patty Duke Astin… The Patty Duke Show was created by novelist Sidney Sheldon.

Something in Common with Patty Duke