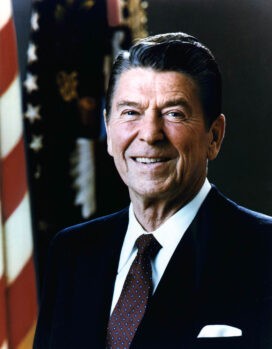 President of the United States from 1981-1989, Ronald Reagan was known as a staunch conservative, a cheery optimist, and an implacable foe of Soviet communism.

Ronald Reagan began his career as a sports announcer on radio, then moved to Hollywood and became a movie star. Reagan made over fifty movies as a reliable supporting actor or benign leading man, but his real calling seemed to be in politics. He served as the governor of California (1967-75) and then in 1980 defeated Democrat Jimmy Carter to become the 40th U.S. president. He advocated lower taxes and higher defense spending, and aggressively challenged the Soviet Union with his rhetoric.

Reagan’s two terms in office were clouded by an exploding budget deficit, high unemployment and deep recession, and, in the last years, a back-door scheme to fund anti-communist forces in Central America — the so-called Iran Contra affair that led to the trial and conviction (later overturned) of Lt. Col. Oliver North. Reagan, however, emerged from the troubles unscathed, and went on to become a lasting hero of the Republican Party. He stepped down after two full terms and was succeeded by his vice-president, George Bush the elder.

Ronald Reagan announced in 1994 that he was suffering from Alzheimer’s Disease. He spent the next ten years in seclusion and increasingly poor health until his death in 2004.

Ronald Reagan married the actress Nancy Davis (1921-2016) on March 4, 1952; he previously had been married to actress Jane Wyman from 1941-48… Ronald Reagan had four children: Maureen and Michael (with Wyman) and Patricia (“Patty”) and Ron Jr. (with Nancy Reagan)… In March of 1981, Ronald Reagan was shot and wounded by John Hinckley, Jr., an unbalanced fan of actress Jodie Foster. Reagan survived and served two full terms… For Ronald Reagan’s 1994 letter to Americans about his Alzheimer’s disease, see this page from the Reagan Library… Ronald Reagan wrote two autobiographies: Where’s the Rest of Me? (1965, updated in 1981) and An American Life (1990)… In 2003 another actor became governor of California: Arnold Schwarzenegger… Ronald Reagan often spent time at Rancho del Cielo, his ranch north of Santa Barbara; the ranch was about 18 miles from the Neverland Ranch of pop star Michael Jackson.

Something in Common with Ronald Reagan